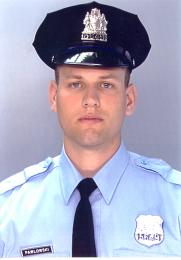 Police Officer John Pawlowski, assigned to the 35th District, was responding to a radio call for a disturbance between a cab driver and a male at the intersection of Broad and Olney Streets. Upon arrival, the cab driver pointed out the suspect, who had his hands in his pockets. Officer Pawlowski approached the offender and asked him to show his hands, at which point the offender opened fire through the pocket of his coat, fatally wounding him. Officer John Pawlowski was 25 years-old, served with the Philadelphia Police Department for almost six years, and is survived by his wife, child, three brothers, a sister, and his father.