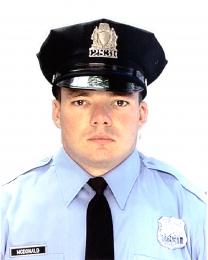 Police Officer Patrick McDonald, assigned to the Highway Patrol Unit, and on routine patrol in the 22nd District, made a routine car stop at 1:45 pm. The passenger, after being asked to exit the vehicle, jumped out of the driver's side door, and fled on foot. Officer McDonald pursued him for several blocks, while requesting assistance from other officers. Near the intersection of 17th and Dauphin Streets, Officer McDonald caught up with the offender and was shot and killed in a violent confrontation. Police Officer Richard Bowes, who was responding to assist Officer McDonald, was also shot and injured in an exchange of gunfire where the suspect was killed. Officer McDonald had recently taken a promotional exam for the next rank of Sergeant. He was the twelfth man on the list, and was promoted posthumously at his funeral service, with a new badge number of #398. His badge as a police officer, #2831, was also retired. Sergeant Patrick McDonald was 30 years-old, served with the Philadelphia Police Department for 8 years, and is survived by his mother, father and sister.