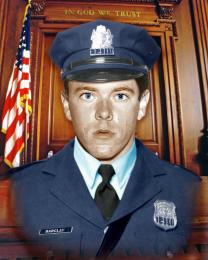 Police Officer Walter Barclay, assigned to the 35th district, was responding to a police radio call of prowler in the rear of 6604 N. 5th Street, on October 27, 1966, 3:20am. Upon arrival, Officer Barclay, along with other 35th district officers, encountered an offender who was burglarizing the Marvin Beauty Salon. While attempting to arrest the offender, Officer Barclay was shot several times, suffered severe injuries, and died due to complications of his gun shot wounds over 40 years later. Officer Barclay was 23 years-old when he was shot, and 64 years-old when he finally succumbed to his injuries. He had served on the Philadelphia Police Department for almost two years, and is survived by a sister and brother.