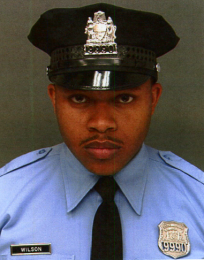 Police Officer Robert Wilson was shot and killed when he and his partner interrupted a robbery at a video game store at 2101 West Lehigh Avenue at approximately 4:45 pm.

The officers were conducting a security check of the businesses in a strip mall and had parked in front of the store. Officer Wilson went inside the store to conduct the security check and to buy a video game for one of his sons. While he was inside two armed brothers entered the store and announced a robbery, not noticing Officer Wilson's presence or the patrol car parked out front.

Officer Wilson immediately announced himself. He exchanged shots with the siblings as he drew fire away from the customers and employees. Wilson was struck three times during the exchange of gunfire during which more than 50 shots were fired. The robbers then exited the store and engaged in a shootout with Officer Wilson's partner, who had remained in the patrol car. One of the subjects was wounded during the second shootout.

Both siblings were arrested and charged with Officer Wilson's murder. One of the brothers was on parole for robbery at the time and both had extensive criminal histories. Officer Wilson served with the Philadelphia Police Department for eight years. He is survived by his wife and two young sons.